Myths and Legends of India – Stories we grew up with 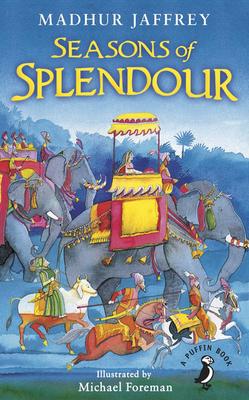 Seasons of Splendour by Madhur Jaffrey

The Hindu calendar, traditionally followed by Indians is similar to the Jewish calendar based on the moon. Even today all festivals are decided on the basis of the Hindu Calendar.

Every Indian festival has its own significance and it’s own legend signifying it’s existence.

This is what gives India its rich heritage culture and diversity.

No child in India is devoid of these mythical tales replete with valour, courage, fantasy ending with the classic dichotomy of good vs evil.

Madhur Jaffrey more known as queen of curries and renowned for bringing Indian cuisine to American cookbooks is probably lesser known as a writer. Her book Seasons of Splendour is a lovely tale of Myths and Legends of India. Just like her flair for the Indian palate she has added her flair to this book by adding her own personal accounts of her life in Delhi.

Today’s kids may not witness large joint families of 40 to 50 members living under one roof but this was a common phenomenon a generation or two ago. While there are cons to living in a joint family we can’t ignore the pros. Boredom a more modern term was non existent amongst young and old in those days.

Today, we parents struggle passing time with our young ones but in those days there were grand parents, uncles, aunts, cousins who were ever ready to engage in a story telling session or put up a dramatic performance or engage the kids in a religious ritual. This is the life Madhur Jaffrey has hailed and for a minute you feel as if you are part of this family, listening to tales of yore, eating the sweet delicacies and a member of this great Indian joint family

What makes the book a great read is that she has organised the stories based on the Hindu calendar. The book is great mix of known and unknown legends. While the tales if Rama, Krishna, Ganesh are told we also have lessor known tales of Doda and Dodi, Satyavan and others.

During my childhood I heard most of these stories from elders or saw them in a comic strip called Amar Chitra Katha, owning a collection like this is for keeps. Easy to read, the writing is lucid and eloquent. It also has a pronunciation section for every Hindu word used and vivid Illustrations by Michael Foreman

So let’s get Seasons of Splendour on this festival of Ganesha. What a perfect bedtime tale for your young one it will be.

Click on the title above to be directed to Amazon