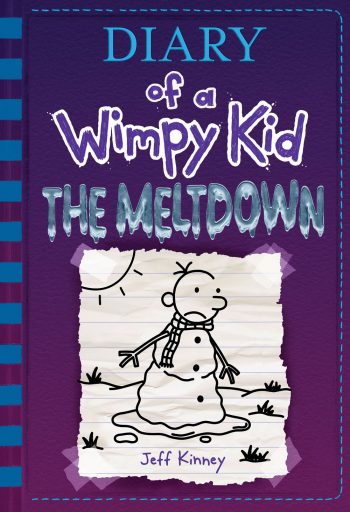 After writing and illustrating 12 Diary of a Wimpy Kid books, author Jeff Kinney wanted to keep his new endeavor fresh.

Always looking for a new topic to explore, he decided to put hero Greg Heffley and sidekick Rowly Jefferson in a war-like challenge.

Influenced by “Lord of the Flies,” Kinney has Heffley’s neighborhood shut down by a massive snowstorm, leading to an epic fight for survival with towering snow forts and chilling snowball fights.

Kinney describes his 13th book, “Diary of a Wimpy Kid, the Meltdown,” as a disaster story where “anything can go wrong” and readers worry if Heffley can survive.

“It’s like a kid-friendly ‘Game of Thrones,’” he said.

The book will officially be released Oct. 30, but fans can read one chapter for free at www.wimpykid.com.

And just as he tries to keep his books original, he kicks off their release in a different way every time.

Once he brought a snow-making machine on the road with him so kids in places like Miami, Fla., could experience a snowstorm.

This time he will head out from his beloved Plainville with an interactive show with trivia contests, drawing competitions and a dance off for parents. “I don’t think any author has done it this way,” he said.

The tour starts in Boston on Oct. 30, goes to Kinney’s Plainville bookstore, An Unlikely Story, and then off to New York and beyond.

The Wimpy Kid series has been a tremendous success since the first one appeared in 2007.

It has resulted in sales of more than 200 million copies and been made into popular movies and a Broadway musical.

But, as successful as the series has been, it is not the end all and be all of Kinney’s life.
He said his life is centered around his family and adopted hometown. Even if it were not for the book sales, he said the “essence of my life” would not be greatly different. It would still involve coaching youth sports and attending his children’s basketball games.

A big part of his life is the bookstore he and his wife built at the corner of South and East Bacon streets in Plainville.

It has become a showplace and source of pride for the town and a draw for well-known authors such as Chelsea Clinton who are touring to promote their books.

The building, made largely with repurposed wood and materials from other buildings, is rated as one of the most environmentally friendly in the state.

It is always buzzing with activity, he said, hosting up to 300 events a year, including the speakers series that brings authors out of the cities and into a suburb to talk books.

Kinney said he loves to sit in on the talks because he always learns something.

Despite the crowds who visit An Unlikely Story, these are tough times for independent bookstores, and Kinney said he is still working to get to a break even point with the business.

But, he said, its success is measured in how much a part of the community it has become and how many people it has brought to Plainville.

“It’s really good for the town. There is a lot of pride in it. It’s a shared resource,” he said.

If you go:
WHAT: Tour and live show to launch Jeff Kinney’s new Wimpy Kid book, “The Meltdown.”

TICKETS: Available through Eventbrite. Only overflow tickets remain for the Unlikely Story show.