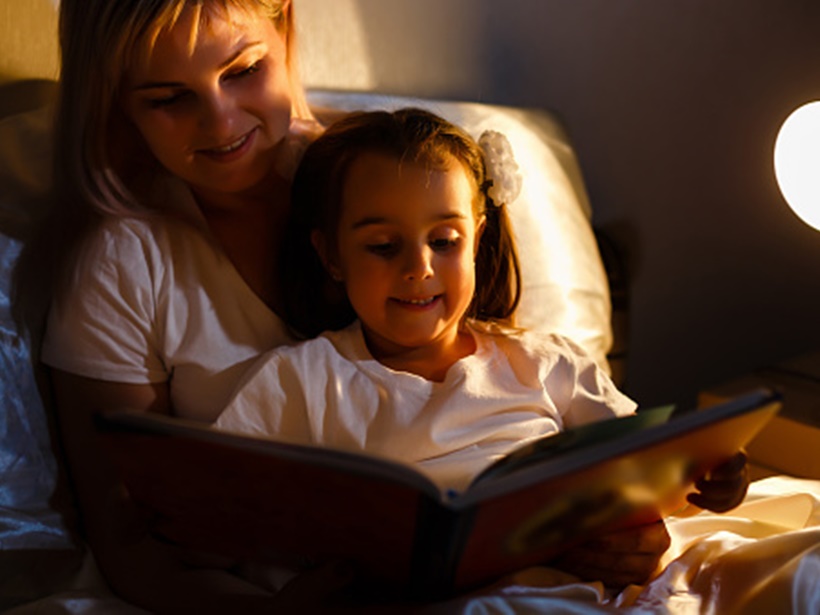 From three through four years of age, children show rapid growth in literacy. They begin to “read” their favourite books by themselves, focusing mostly on re-enacting the story from the pictures.

Language development is very important in a child’s early years, from communicating using facial expressions, movement of the body, crying to communicate to verbal and sign language.

The mind of a young child is like a sponge, they have the ability to absorb a lot more than adults do and are able to acquire thousands of words and use them with adults to communicate. Listening, speaking, reading and writing lay the foundation for language development. One of the most important habits to inculcate in your child is reading. It helps children visualise different scenarios, empathise with different characters and understand the world around.

It is important to keep inculcating habits of the mind in children at a young age. They need to keep reading about and experiencing positive life experiences. Hence, it is important that we give emphasis on introducing children to positive stories at a very young age.

Importance of storytelling: What research says

Research shows that from as early as the first months through the second year of life, children’s experiences with oral language development and literacy begin to build a foundation for later reading success (as referenced from Burns, Griffin, & Snow, 1999; Strickland & Morrow, 1988; Weaver, 1988).

An infant’s brain develops a “native language map” between the fourth and eighth month wherein a neuron is assigned to every sound, hence talking and reading play an important role. From two to three years of age, children begin to produce understandable speech in response to books and the written marks they create.

From three through four years of age, children show rapid growth in literacy. They begin to “read” their favourite books by themselves, focusing mostly on re-enacting the story from the pictures. Eventually, they progress from talking about each picture individually to weaving a story from picture to picture using language that sounds like reading or written language (as referenced in Holdaway, 1979; International Reading Association & National Association for the Education of Young Children, 1998; Sulzby, 1991).

Also Read: 8 children’s books on the theme of peace

Between two to six years, a child’s vision wiring matures, motor coordination is achieved and they are able to think critically. The preschooler is now capable of a longer attention plan and rapidly develops a larger vocabulary, hence this period is a fertile ground for introducing reading. When using various forms of writing, children maintain their intention to create meaning and will often “read” their printed messages using language that sounds like reading (Clay, 1975; McGee &Richgels, 1996; Sulzby, 1985b).

Armed with this information, we now know that children need good books to refer to and learn from. Children need role models to look up to, so you need to make sure you walk the talk, introducing them to inspiring books, movies and stories that set positive examples and help build their life story.

Even though parents today are aware that they need to be mindful when dealing with their children, yet a lot of them are lost around how to go about building strong children.

Here are a few tips parents can follow to introduce children to storytelling:

Start telling your children interesting stories right from a young age (read to them, be animated while narrating to make it interesting).

For children about 5 years, tell them a story and then ask them to narrate the same story.

For children about 7-8 years, give them easy scenarios and let them come up with a story.