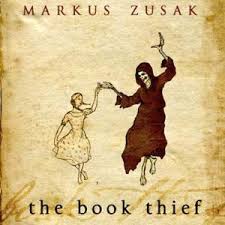 This month at Eager Readers we are reading the book “The Book Thief” by Markus Zusak.

The book is about Nazi Germany. The narrator the book is Death which is a very interesting way of narrating a story.
As a creative writing exercise the students were asked to write a 250 words piece on death as the narrator.
Below are some of the best pieces written by students in the age group 9-14 yrs

As winter melts away,the first flowers of spring blossom over the graves of the those whose souls I did whisk away.What an odd hobby of ending someone’s life you may ask,but what can I say, it is my job after all.It does not bring me the slightest pleasure in draining the life out of someone while watching their loved ones mourn for them.Yesterday was heartbreaking.A newly married soldier bade goodbye to his wife and mother as he set out to fulfil his duties and to fight for his country.After the demise of his father,the family lost its financial stability.Life was tough.With a heavy heart and empty pockets he set out for his journey,unaware of what the near future brings.After a few days, I see him amidst a bloody war.Bullets fired like rain and blood was everywhere.The soldier was sprinting across the battlefield to save his wounded friend when,a bullet came zooming and plunged into his fore arm.The tiny piece of metal hit him with such a great force that he collapsed on to the floor and blood gushed out of his arm like a cascade of red waters.It was horrifying to see him in pain as he gasped for his breadth.At that moment I only saw a dying soldier and not a husband or a son. That was the moment I decided to introduce my brutul self and do my duty.I flew down towards to him and in the gentlest possible manner , withdrew his suffering soul and sent him to the heavens above,so my master(God)can testify him.A few moments later after the chaos had subsided,another soldier came running towards his lifeless body and shouted out to the others that he found another one.Soon after the body was transported and given back to the family,I watched as his heart-broken mother tried to console her grieving daughter-in-law.She wailed as she looked up at the sky.With eyes red with both anger and grief she screamed at me and asked me why I took him.People are so judgemental.They are so insensitive.Put yourself in my shoes and try to think what you would have done in my place.Would you rater watch a soldier suffer and gasp for breadth in a pool of blood or would you ease his suffering and bring peace to his soul by ending it all…..For all those of you who think of me as a cruel sadist , well rethink your judgment and understand the reason for my doings.I don’t expect you to jump in joy at the demise of your loved one.All im asking is not to think of me as the one who burdened the soul,but the one who saved it .For I am Death and this is my story.

AMIDST THE INCESSANT FIRING, CRASHING AND BOOMING I ARRIVED, WHOOSHING THROUGH THE AIR ONTO THE BATTLEFIELD. EVEN BEFORE MY LANKY FIGURE COULD TOUCH ITS POLE-LIKE LEGS TO THE GROUND, A BULLET PASSED THROUGH ME, HITTING A SOLDIER BEHIND. AS SOON AS HE FELL, I GRABBED HIS SOUL VICIOUSLY, ASSUMING THAT HE WAS DEAD. BEFORE THE COLD SOUL MELTED AWAY IN MY HANDS, I QUICKLY PUT IN MY BAG. I GRADUALLY GOT MORE AND MORE VICTIMS AS I STROLLED THOUGH THE PLACE. PEOPLE SAW ME LAUGHING CRUELLY UNDER MY BLACK HOOD AS I PUSHED DOZENS OF SOLDIERS IN THE RANGE OF THE BOMB TO GET MORE PEOPLE. AFTER ALL, I WOULD GET A HIGHER SALARY BY MY BOSS. EVERY NOW AND THEN I KEEP CREATING EPIDEMICS WHEN THERE IS A SHORTAGE OF DEAD PEOPLE OR MONEY. ANOTHER SCENARIO I HAD CHANGED JUST FOR MY ADVANTAGE. “JUST DOING MY JOB. NO HARD FEELINGS,” I SHOUTED AS I ZOOMED PAST THE HOSPITAL. “YOU ARE NOTHING MORE THAN A GAMBLER. ONE FINE DAY YOUR LUCK WILL SURELY RUN OUT.” A FURIOUS PATIENT YELLED AT ME FROM THE WINDOW. I IGNORED HIM AND SET OFF TO COLLECT MY SHARE OF DEATH MONEY. TODAY, I HAVE EXTENDED MY LIMIT ONLY UPTO GETTING PEOPLE IN WARS AND EPIDEMICS. BUT TOMORROW, I WILL KILL PEOPLE BY MY OWN HANDS! I WILL GO TO A CARNIVAL OR CONCERT WHERE PEOPLE ARE PACKED LIKE SARDINES AND SET A FIRE OR BOMB OVER THERE. ZOOMING PAST THE ‘GRAVEYARD’ THAT I’D HAVE MADE, I WOULD COLLECT ALL THE SOULS AND HAND THEM TO MY BOSS.

I am a very friendly death.  Everyone thinks I am cruel, but I am just doing my job, also I am saving you all from the several sufferings of the human world. You are a free  soul in heaven. While the human world is like hell. I will gently pick your  soul when you  die and take your soul, you won’t  feel a thing.  It is a very hard  life in the human world, as  for  in the heaven, it is a very simple life there.  You can play and run  around there will not be any homework or job in the heaven as it is  in the world.  There’s  no other place in the world better or peaceful than heaven.

A long time ago I was a normal human being .I was an orphan .I was not so good in academics and all my classmates were always teasing me .My teachers always scolded me. Only one teacher always supported me. She asked me to ignore them and try again to pass the exams .One day some boys were hitting me and I ran towards the right side. I  entered a graveyard! I fell into a hole. My leg was stuck. The boys looked everywhere but not in the hole. They could not find me and  so they went home. As soon as they left two people with a coffin came towards me.  I was shouting at the top of my voice but the hole was too deep for them to hear. They kept the coffin on me and buried it. I was not able to breathe. I died. God gave me the job of death. I took it. I killed all the people who used to trouble me and sent them to hell. I took the soul of my teacher who supported me very carefully to the heaven. I was very with my job!