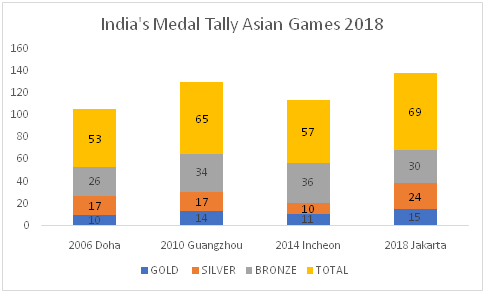 The Asian Games 2018 co-hosted by the twin cities of Jakarta and Palembang were held on 18th August, 2018 to 2nd September, 2018. India had a total of 69 medals – 15 gold, 24 silver and 30 bronze medals. Athletics category has continued the trend of getting India the maximum number of medals; 19 medals in total. This was India’s best performance till date, beating the record of 65 medals earned in Guangzhou in 2010 and a steep increase from last Asian Games performance in 2014 where they got 57 medals.

The Asian Games were first held in 1951 in New Delhi with 11 Asian nations as participants. After this, the games have been held every 4 years, with the participation now reaching 46 countries.

Japan was the number one nation with maximum number of medals for 8 years in a row after which China has taken the lead for the next 10 Asian Games. India is ranked 6th overall with 667 medals over the years. Looking historically at the last 4 Asian Games we see that India’s medal tally has been improving steadily.

However, there is a long way to go before we achieve our full potential as we are a 1 billion plus strong country and according to a report published by IRIS Knowledge Foundation, we are set to become the youngest nation by 2020.

China has a whopping 289 medals in total followed by Japan with 205 medals. This is a far cry from India’s 69 medals.

Some of the highlights of Indian performers are mentioned below

Let’s give an applause to not only these players but all the Asian Games participants. Good sports infrastructure, government support and youth focus are some of the things that can lead us to becoming bigger and better in these games.