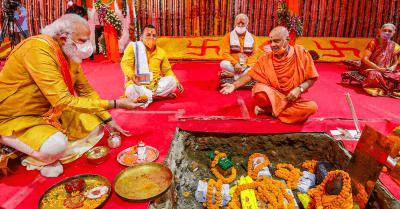 Prime Minister Narendra Modi participated in the “Bhoomi Pujan” or the groundbreaking ceremony to mark the construction of the grand Ram Temple in Ayodhya on August 5,2020.

Mr. Modi began his visit by offering prayers at the Hanumangarhi temple- a shrine to Lord Hanuman there. He then went to Ram janambhoomi or the birth place of Lord Rama to pray at the shrine to “Ram Lalla”, the infant Lord Rama, before proceeding for the “Bhoomi Pujan” ceremony of the Rama Temple.

He was surrounded by seers, taking part in the rituals to perform the Bhoomi Pujan for the Ram Temple in Ayodhya. According to the priests of the Ram Temple, nine bricks were kept at the site of the ceremony which were sent by the devotees of Lord Rama from around the world in 1989. The priests confirmed about two lakh seventy five thousand such bricks out of which 100 bricks engraved “Jai Shri Ram” have been taken.

After the ceremony with the Prime Minister laying a silver brick for the grand Ram Temple, he addressed the gathering of spiritual leaders who had come to attend the event. The Prime Minister began his address chanting “Siyavar Ram Chandra Ki Jai” and “Jai Siya Ram”. He talked about the liberation of Ram Janambhoomi and the infant Lord Rama who will now reside in the grand temple build by Ram bhakts.