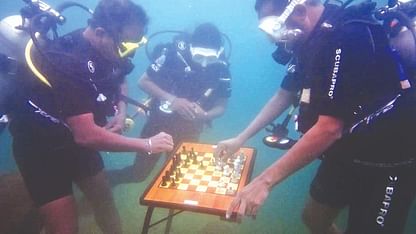 The 44th FIDE International Chess Olympiad being hosted by India comprising open and women’s tournaments, as well as several events designed to promote the game of chess, is being held in Chennai, Tamil Nadu, India. Taking place between July 28, 2022, and August 10, 2022, the Olympiad has brought more than 2,000 visitors from 180 countries together. However, China and Russia will not be taking part in this edition of the event.

Adding to the craze around the Chess Olympiad which has garnered plenty of attention in Tamil Nadu and Puducherry, a team of divers led by one of the divers, Aravind decided to promote the game by taking it underwater. The aim also followed to create awareness about Marine Pollution and how it has impacted the ocean floor.

“We had six players and made use of three specially made chess boards, pieces and tables that could be used underwater. The chess pieces and board had to be made extra heavy for it to be used at the seabed,” said Aravind Thaurunsri, The Director of Temple Adventures.

Arvind dressed up like the mascot ‘Thambi’, wore a white shirt with a dhoti having a checkered Chess border with the other team members wearing the typical scuba gear. The team dived up to 60 feet near the Neelankarai beach in Chennai. Soon, after the initial 40 minutes that took to set up the underwater game, the teams also spent some time enjoying the game amid the depths.