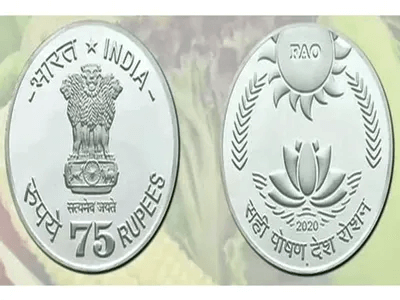 Commemorative coins are issued in various denominations ranging from 5 paise to Rs 100. The lower denomination coins are usually for general circulation and their metal composition is in line with regular coins. On the other hand, the higher denominations usually contain some silver and are meant for collection purposes only.

Prime Minister Narendra Modi on Friday released a commemorative coin of Rs 75 to mark the 75th anniversary of the Food and Agriculture Organization (FAO). The coin will help maintain long standing relation between India and the UN agency. Earlier this week, PM also released a commemorative coin of Rs 100 denomination to celebrate the birth anniversary of Rajmata Vijaya Raje Scindia  through video conference.

The Prime Minister released 17 new biofortified crop varieties and emphasized the government’s commitment towards procurement of agricultural crops at minimum support price [MSP]. The event regarded the agriculture and nutrition section with an aim to completely eliminate hunger, undernourishment, and malnutrition from the country. It was witnessed by the  Anganwadis, Krishi Vigyan Kendras, Organic and Horticulture Missions across the country.

“MSP and government procurement are an important part of Indian food security. It is important that it continues to function with better facilities and in a scientific way. We are committed towards this,” he said. He also talked about the promotion of millets and high nutrition crops to address malnutrition in the country. PM added that the country has always had a historic association with the Food and Agriculture Organization (FAO).