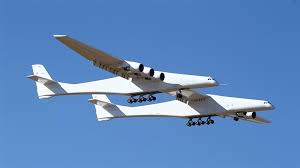 With a dual fuselage (main body of the plane) design and a wingspan greater than that of a football
field, the aeroplane took off from Mojave Air and Space Port in California.

It has the maximum speed of 302.4 km per hour. The plane flew for 2.5 hours above Mojave Desert
(California, U.S) at an altitude of 17,000 feet. Stratolaunch, the company which has designed this plane was founded in 2011 by the late Microsoft co-founder Paul Allen.

It aims at providing military, private companies and NASA itself an economical solution for sending satellites into space. Their business model calls for, getting satellites into space “as easy as booking an airline flight”; “We finally did it” said Stratolaunch Systems CEO Jean Floyd at a news conference from the hangar at Mojave Air &amp; Space Port. “It was an emotional moment to watch this bird take flight”

The aircraft’s wingspan measures 385 feet — wider than any airplane on the planet. From tip to tail, it’s
238 feet long. It weighs half a million pounds. It’s so big, it has two cockpits, one in each fuselage (but only one is used to fly the plane.)

Dozens of photographers, industry bloggers and aerospace enthusiasts gathered this week to glimpse
the unique twin-fuselage plane. “People are interested in the first flight of Stratolaunch because they want to see the future” an analyst said. “It’s the same reason why people tune in each year to watch the Apple keynotes. People want to see what’s next.”