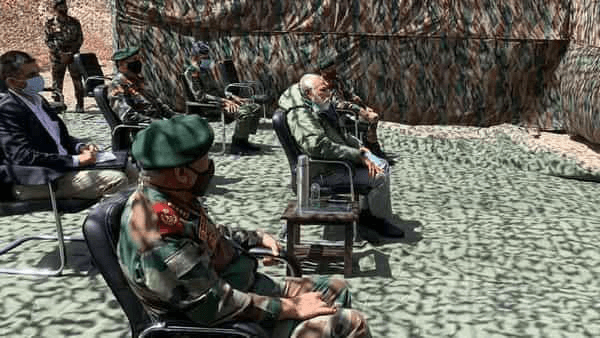 The Prime minister of India, Mr. Modi arrived in Leh, the capital city of Union Territory of Ladakh on July 3,2020. He reached there, 17 days after the Chinese troops killed 20 of the Indian soldiers in the Galwan valley incident. Mr Modi was accompanied by the Chief of Defence Staff General Bipin Rawat  and the Army Chief General Manoj Naravana. He visited one of the forward locations in Nimu interacting with the personnel of the Indian Army, Airforce and ITBP there.

On a surprise visit to Ladakh, the Indian Prime minister addressed the troops at Nimu outside Leh and later visited the hospital to meet the injured soldiers of the Galwan valley clash on June 15.

Mr Modi adds by the unity towards the Mother India and its fight with determination against many crisis at the same time. He encouraged the nation to cross the prevails with the travails eventually.