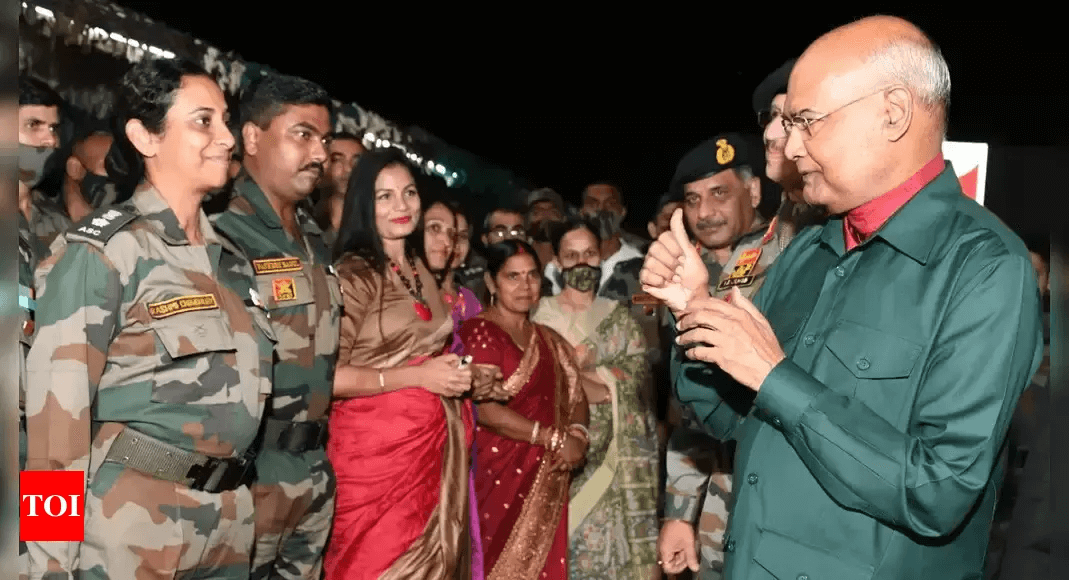 President Ram Nath Kovind was on a two-day trip to the Union territories of Ladakh and Jammu and Kashmir, to celebrate the occasion of Dussehra with the soldiers of the Indian Army in Kargil’s Drass area, one of the coldest places in the world. With this, the President broke the tradition of celebrating the festival in Delhi every year.

The President commenced his visit to Ladakh and Jammu and Kashmir on Thursday, October 14, 2021, by arriving in Leh and performed Sindhu Darshan in Shey village while he travelled to Jammu and Kashmir’s Udhampur area in the evening housing the Northern Command headquarters.

He interacted with army troops and their families at Udhampur and had ‘Bada Khana’ with troops on Mahanavami, the culmination of the nine-day long Navratri festival on Thursday.

The President flew to Drass from Udhampur-based Northern Command and was received by the Lieutenant Governor of Ladakh, R. K. Mathur and was accorded a guard of honor.

Drass is known as “The Gateway to Ladakh” and is famous for its high-altitude trekking routes and tourist sites. It is the place where soldiers stand brave to guard the Line of Control (LOC) throughout the year. Mr. Kovind visited the Kargil War Memorial at Drass where he laid a wreath and paid homage to the brave soldiers who fought the Kargil battle to defend the nation. He later celebrated Dussehra with troops in Drass amid the slogans of ‘Bharat Mata Ki Jai’.