Remembering Chuck Yeager, a Pilot with the Right Stuff 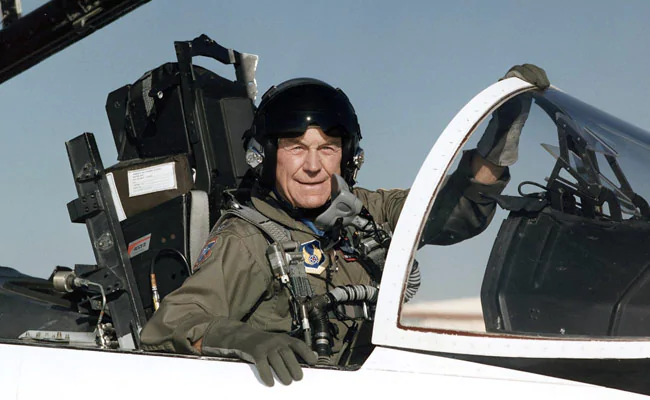 Charles Elwood “Chuck” Yeager, the most famous test pilot of his generation, who was the first to break the sound barrier, died on Monday in Los Angeles. He was 97. His wife, Victoria, announced the death from Gen. Yeager’s official Twitter account.

Yeager was born on February 13, 1923 in the tiny town of Myra, West Virginia, and grew up fixing pickup trucks alongside his father. He joined the Army Air Corps in September 1941, three months before the United States entered World War II, and started out as an aircraft mechanic before undergoing flight training.

He became the first person to fly faster than the speed of sound – referred to as breaking the “sound barrier” – on October 14, 1947 abroad the rocket-powered Bell X-1 aircraft that was painted orange and resembled a 50-caliber machine gun bullet.

He became a fighter ace in World War II, shooting down five German planes in a single day and 13 overall. In the decade that followed, he helped usher in the age of military jets and spaceflight. He flew more than 150 military aircrafts, logging more than 10,000 hours in the air.

His signal achievement came on Oct 14, 1947, when he climbed out of a B-29 bomber as it ascended over the Mojave Desert in California and entered the cockpit of an orange, bullet-shaped, rocket-powered experimental plane attached to the bomb bay.

“The Right Stuff”, a 1979 book about early days of the space program by Tom Wolfe has Yeager as the most important character.

NASA’s administrator, Jim Bridenstine, described General Yeager’s death in a statement as “a tremendous loss to our nation.” The astronaut Scott Kelly, writing on Twitter, called him “a true legend.”