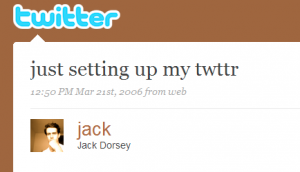 Twitter is an American online news and social networking service on which users post and interact with messages known as “tweets”;. Tweets were originally restricted to 140 characters, but on November 7, 2017, this limit was doubled for all languages except Chinese, Japanese, and Korean. Registered users can post, like, and retweet tweets, but unregistered users can only read them. Twitter, Inc. is based in San Francisco, California, and has more than 25 offices around the world.

Although the first tweet was actually sent on the 21 March 2006 many of us probably didnt start using the social network until several years later. And a lot of those first attempts at writing something interesting, witty and informative within 140 characters failed.

The ex-president of the United States, Barrack Obama, was a relatively early user. His first tweet came just over a year after the site was created. He now has the 4th highest number of followers – more than any other world leader.

The service rapidly gained worldwide popularity. In 2012, more than 100 million users posted 340 million tweets a day.  In 2019, the social networks audience size is projected to reach 275 million monthly active users worldwide. Despite audience growth woes and revenue struggles, Twitter is still one of the leading social networks worldwide and a popular marketing channel.